All Pathways Lead to Tech Skills

A facinating piece from the Washington Post offers some data-driven insights on today’s labor market. The headline is eye-catching: “The most unusual job market in modern American history, explained” and this reader was hit immediately with provocation. A data visualization states ‘Demand for workers has recovered, but the number of willing workers has not’.

Then, the economy experienced two historic surprises. First, demand for workers came soaring back at a velocity almost never before seen. And second, despite companies going all out to hire, millions of workers either retired early or stayed on the sidelines. These two forces collided to create the most unusual job market in living memory — and an economy afflicted not by too few jobs, but too few workers.

Well, the data are clear: the number of people who have returned to the workforce today is fewer than were in the workforce in March 2020 or right before the coronavirus causing COVID-19 changed everything. 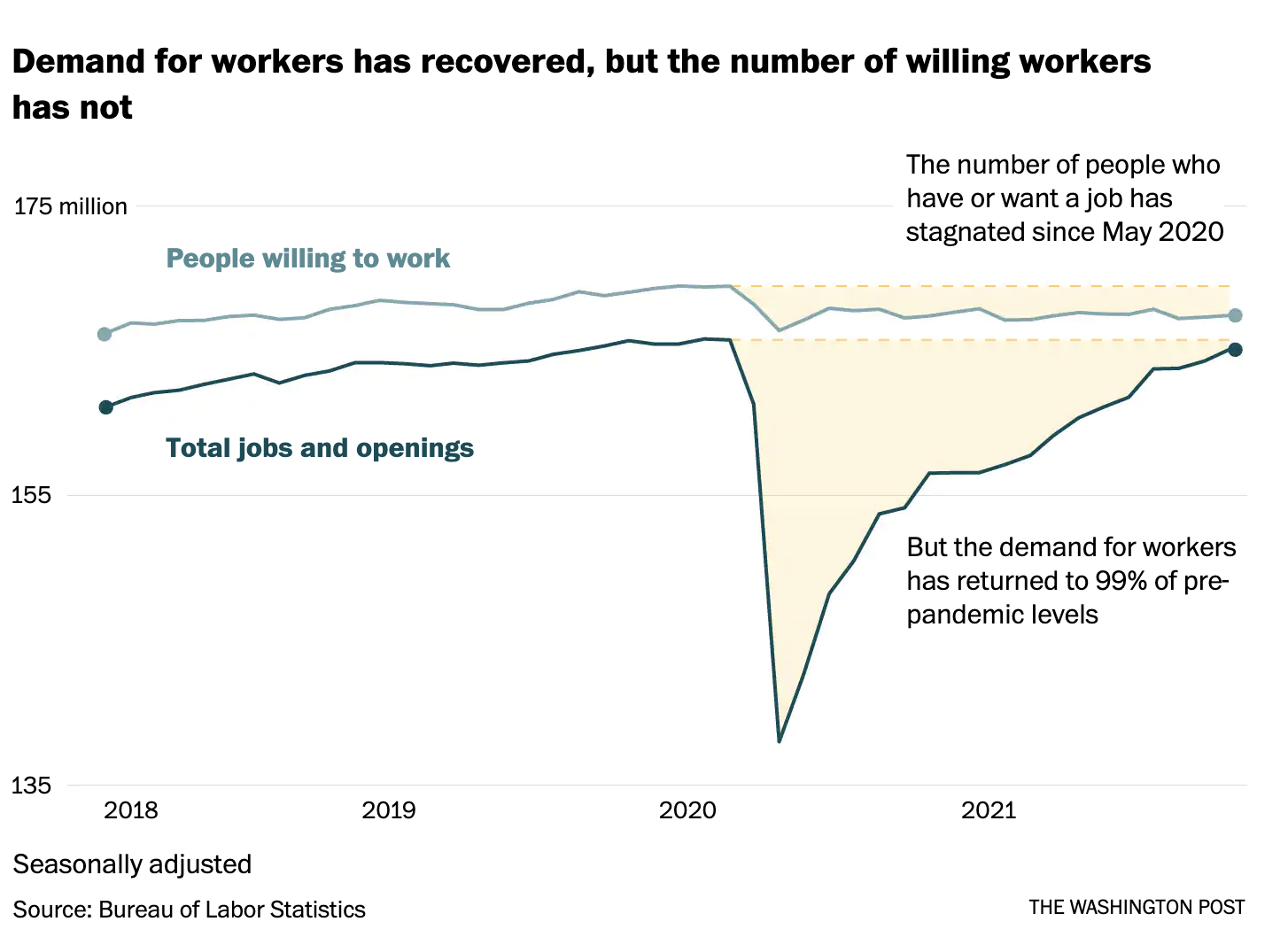 Ok, so what’s the point? Let’s look past the data and think about the effect rather than the reason. I’ll sum it up here rather cheekily: all roads lead to tech skills. If there is any semblance of hypothesis here it’s that employers cannot - and will not - wait for the sidelined labor pool to back in the work game, and when workers do, tech skills will be even a de facto requirement for the exact same job. Precedent suggests this.

Each of the last four or five economic recoveries have been ‘jobless recoveries’. In broad strokes, employers use economic recessions to optimize and upgrade: redundancies are eliminated, workflows streamlined, inefficiencies are identified, overhead is cut and operating costs and COGS are slashed, and layoffs. Interest rates drop so to spur economic activity, and jumpstart hiring. But first, a wave of low-interest rate financing ensues: new technologies are integrated, new equipment and machinery is purchased or leased, facilities are improved. By the time hiring gets going, employers now have streamlined their workflows, automated process and integrated new technology into everything. Those out of work don’t sit idle: they finance more education and acquire new and (hopefully) in-demand skills. Hiring eventually returns, but only the better-skilled get the jobs. Those who remained at the same skill level are in a precarious position. The job skills arms race has been on.

In today’s context, what is that ‘better skill’ to have? Clearly, tech skills.

Today, employers are forging ahead and adapting to this new economy or the Industry 4.0 economy. Employers will make do with fewer workers by integrating technologies and automation and squeeze more production out of each worker. Workers who get the good jobs will have the skills - the acumen and comfort - to work with technologies or the basis of web fundamentals by which to learn how to work with new platforms, apps and tech integrations.

So, as you can clearly see, all pathways lead to tech skills.

This is a good segue to our collaboration with the German-American Chamber of Commerce on an innovative pre-apprenticeship consortium model that aims to better upskill folks to a range of tech skills - basic web to ‘work with tech’ to advanced technologies - and provide actionable career pathways to real jobs.